Posted by cmbutzer on Jun 4, 2015 in Uncategorized | No Comments 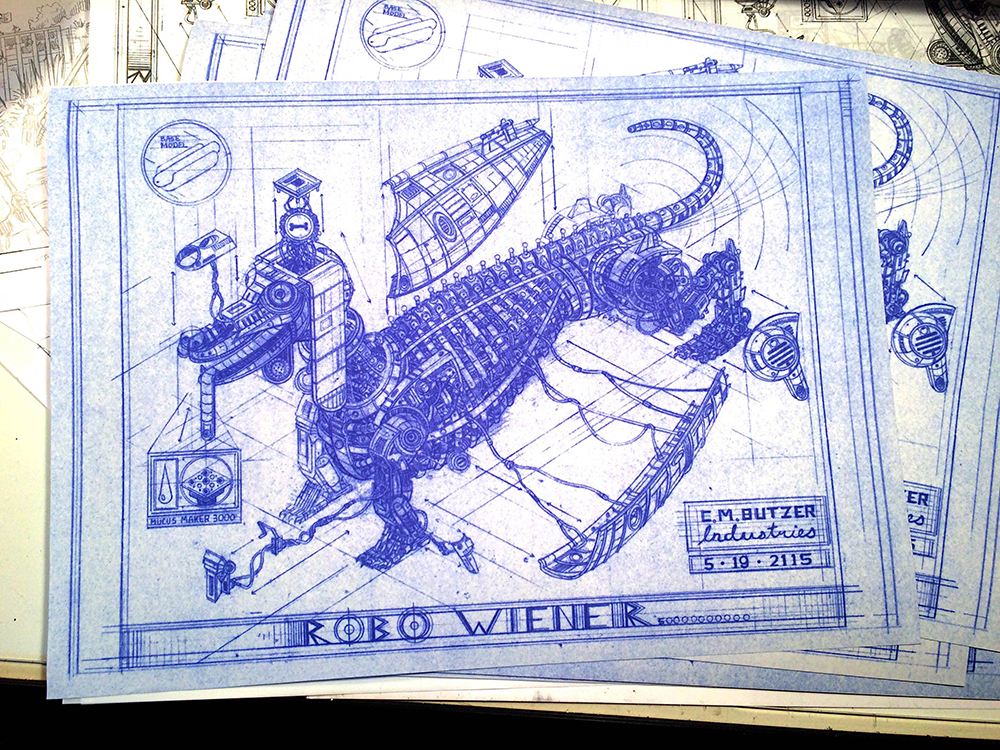 Let’s start this story with several people laughing at me over the phone. I wanted to get my technical wiener dog illustration printed- not only printed- an old-school blue-print. I called several places in New York, that specifically had “Blueprint” in their names and none. NONE! make blue line prints. They all just make big photocopies from digital files when someone needs a schematic printed. There is nothing wrong with that- but there is nothing cool about it either. One place even told me to call them back if I found one so they could refer people who asked- after laughing at me. Another one advertised that they made them but when I called they confessed that their machine had broken down several years ago and they could not find anyone to fix it.

This bummed me out.

I drew this piece with the intent of having it be a blue line or Diazo print (the technical term for it). When I was in undergrad I had several Diazo prints made from drawing because it brings a particular life and texture to technical and mechanical drawings that no other form of printing captures. It makes blueprints really BLUEPRINTS!

So, as a person who owns a risograph duplicator (another antiquated method of printing that unlike Diazo, is having a revival) I went online and sought to buy one. As I searched it became very clear I had no idea how these machines work. Special paper? Ammonia? what the hell was I getting myself into? I’m still not totally positive how they work- but here’s a better explanation than I can give: Wiki

Just so I wouldn’t hate myself later- I searched “Diazo Printing” The third result was Soho Repographics. I called was transferred to Edward and found, Yes. They do blue line printing.

I went there today and found Edward in the basement along with a lot of printers of varying size and purpose. Tucked away in a corner was the Diazo Machine. Edward printed each copy sepaprately and walked me through the process explaining to me what could be done beyond what I was doing (plans have been hatched).

The machine was still a bit of a mystery to me, even as he explained what it was doing. It had exposure lights and tubes and a jug of ammonia attached to it- gurgling away as the machine printed. You had to feed the paper in once and then again before you got the finished print! It had fake wood panelling, which was both a bit odd and made me nostalgic for old TVs. He explained they used to have 4 machines, two of which were much larger than this one and they got rid of to make room for more modern equipment, and now had two that would print a maximum of 24×36.  Which was fine by me. My prints were half that. One machine was in operation and the other was being held until that one broke.

Was that it for Diazo printing? I hope not. I’ll continue to make them (already got sketches for a robot mouse). I hope others will too. In New York? Go find Edward in the basement of Soho Reprographics and make some prints! Tell him the guy with weird robot dog drawing sent ya!

I’ll be debuting this print at the Grand Street Comic Fest this weekend! 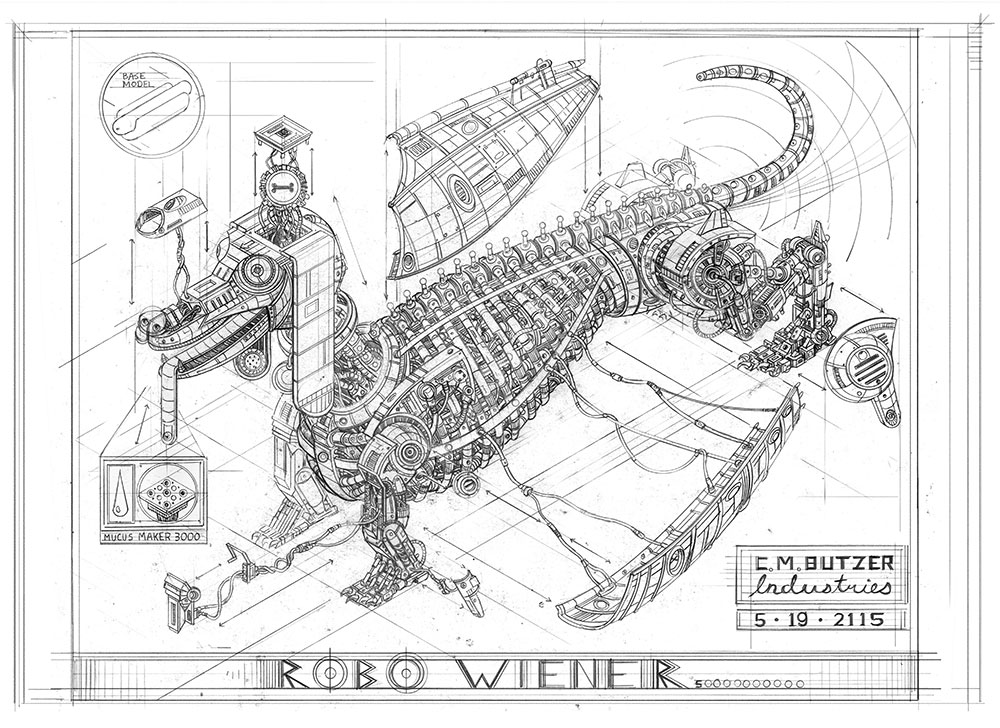