Posted by cmbutzer on Nov 11, 2014 in Uncategorized | No Comments 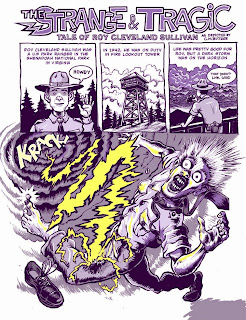 I started this comic a while ago but it kind of lost direction and I set it down until I could figure out what was going wrong. I knew I wanted to do a non-fiction comic about Roy Cleveland Sullivan, a guy who was struck by lightening seven times. My first attempt was becoming either too didactic or way more interested in drawing a guy getting struck by lightening over and over and over, which, I’m not gonna lie, was one of my early motivations (he did survive every strike!) I want to take a broader look at this subject this time- figure out all the elements that are at play. Wish me luck. I want to have it out for MoCCA 2015