Posted by cmbutzer on Jun 10, 2009 in Uncategorized | No Comments 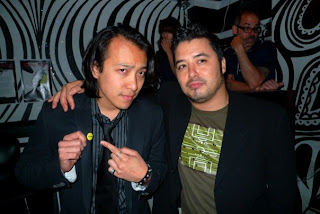 It all started with the Rabid Rabbit Release Party last Thursday, June 4th. It was a great party and it seemed everyone dug the Rabbit. There was much jubilant cavorting and it was nice to see many of the contributors show up (The photo is from that party- that’s Ben X. Trinh).

The Friday I attend the release party for the latest issue of Syncopated in which Rabbit co-founder Paul Hoppe had contributed to at Rocketship comics in Carrol Gardens. That was good fun- but we skipped out early cause I still needed to prepare somethings for MoCCA the next day.

MoCCA 2009– last weekend. It was good and bad. No one in there right mind could argue that the heat was not a major a problem, but on the other hand I sold a ton of Gettysburgs and Rabbits. I also got to converse with a lot of really cool people. I have to say though I’m disappointed that MoCCA has decided to raise the table costs so severely. The reason why this particular festival works so well is small press, self-publishers, and mini-comics. The $400 price tag for a table next year is pushing it- and that’s the discounted price! This price makes me wonder how the funds are distributed.

Finally- the Mazzucchelli show– for those who don’t know David was my Thesis advisor in Grad School and it was a delight to see his dumbfoundingly amazing work be celebrated so well!