C.M.Butzer is an illustrator, cartoonist, and printmaker who works and lives on the Big Island, Hawaii. 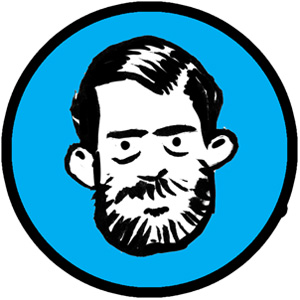 C.M.Butzer is an illustrator, printmaker, and cartoonist who lives on the Big Island in Hawaii. His illustrations have been in numerous books, publications, and have been used on product designs. He wrote and drew “Gettysburg. The Graphic Novel” for Harper Collins which was featured in the Top Ten Non-fiction Graphic Novels of 2009 by the American Library Association. He illustrated the “Naturalist” Graphic Adaptation of the famed autobiography of E.O.Wilson for Island Press in 2020. He has illustrated numerous young adult non-fiction books. Most recently “The First Dinosaur” for Simon and Schuster in 2019. He is an avid printmaker, preferring silkscreen above all other forms of printing because of its vibrant colors. He has exhibited his handmade prints, books, comics, and zines at curated festivals and shows across the continental United States and Canada- including the MoCCA Festival, LA Zinefest, Linework NW, Comic Arts Brooklyn, SPX, Toronto Comic Arts Festival, and many more. His work has been featured in the Society of Illustrators, American Library Association, and the Graphic Novel Reporter.

C.M.Butzer has fallen in love with new home on the Big Island. Where he has rediscovered his love for the outdoors- biking, hiking, snorkeling, and being a truly terrible surfer. He sometimes misses Brooklyn but then remembers New York winters.

C.M.Butzer was raised in a small town, just outside of Portland, Oregon. In 1992 Butzer left Oregon to attend Cornish College of the Arts in Seattle where he earned a BFA in Illustration. After school he worked for Wizards of the Coast. In 1998 he moved to Florence, Italy. Where he met Luigi Galante, who ran a didactic illustration studio. He worked for Studio Galante for nearly five years before moving to New York City to earn his MFA in illustration at the School Visual Arts. He taught “Creating Independent Comics” at SVA for 7 tears. In 2016, he moved to the Big Island, Hawaii.

In the spring of 2005 C.M.Butzer and Paul Hoppe created “The Night of the Rabid Rabbit” as a vehicle to promote themselves and a few of their talented friends. They wanted to create a comic anthology that worked as a complete magazine as opposed to selection of unrelated comics. This lead to a series of award-winning theme-based comic anthologies that have attracted the interest of noted creators such as Seymour Chwast, Marshall Arisman, and Wesley Bedrosian as well as new talent as S.Y.Choi, Andres Vera Martinez, and Ben Marra. The magazine has won awards Society of Illustrators, American Illustration, 3X3 magazine, and CMYK.