150th Anniversary of the Battle of Gettysburg

Posted by cmbutzer on Jul 4, 2013 in Uncategorized | No Comments 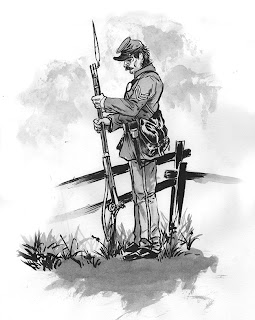 on July 1st, One hundred and fifty years ago one of the most decisive battles of the American Civil war was fought. The battle last for three days and at the end there were nearly fifty thousand casualties- nearly eight thousand people and three thousand horses were dead (amazingly only one civilian died during the battle of a stray bullet). On July 4th of 1863, The Confederate Army retreated and the Army of the Potomac slowly pursued.

I did this sketch to commemorate the anniversary.