Graphic Novels in the Classroom

Posted by cmbutzer on Apr 13, 2009 in Uncategorized | No Comments

I was asked by Dr. Katie Monnin, a professor of Literacy at the University of North Florida recently for my thoughts on comic/graphic novels and there growing presence in the world of education. Below is some of what I wrote her- It’s an overview so I don’t explore some of the historical aspects completely.

When considering Graphic Novels and comics and their place within classroom, one must first examine the initial prejudice that is often associated with them. 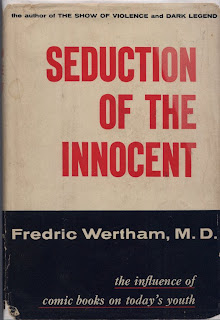 Since the 1950’s comics have been categorized as lowbrow children’s reading material. This was greatly propagated by Dr. Frederic Wertham who 1954 published the popular The Seduction of Innocence. This book argued that comics encourage juvenile delinquency and should be regulated by the government. It’s the same argument that haunts every generation whether it be video games or rap music, some form of media is corrupting our kids (so we’re not responsible for their bad behavior). The major comics publishers of the day were dragged to a public hearing before congress. Although no federal laws were passed the industry adopted a voluntary “comics code” to regulate themselves. This code strictly established restrictions that determined that comics were for children only. The code decimated the industry putting any publisher who did not adhere to its standards nearly out of business. What was once a broad and growing industry was now reduced to limited selection of genre’s and an audience below twelve.
This view is slowly changing with American audiences and can be partially attributed to the rise of graphic novels and manga. But for many this prejudice still exists and hinders the use of graphic novels and comics within the classroom. Comics must be considered equal to other forms of literature within the classroom. Only then can they start to be taught to the fullest potential. 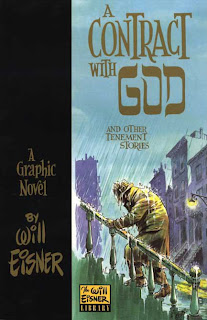 The term Graphic Novel was adopted by comic creators to counter this very prejudice. The term was made popular in 1978 by Will Eisner when he used it on the paperback edition of his book “A Contract with God”. Eisner used the term to separate his book from comic books, which were regarded as cheap children’s reading material.

At this point many within the educational field only see comics as a “gateway” to literacy. Where it is true that comics can help struggling readers. We shouldn’t forget that they are not just a tool towards literacy, but its own form of literacy. As a unique form of literacy students must learn to read comics and in many cases adults need to relearn how to read comics. An excellent example of this is the introduction of Manga (Japanese comics) in the original format. Up until recently Manga has been translated and reformatted for western audiences. The current trend is to publish the comics translated but in its original Japanese format of being read right to left (this is harder than it sounds and must be learned). With the understanding that comics is a unique form literature I think teachers will find them as dynamic as any other form. But if teachers think of comics simply as a tool and not as literature then I think they may have trouble using comics successfully in the classroom.

Once we overcome this prejudice then comics, manga, and graphic novels can be used as any other form of media with the classroom.